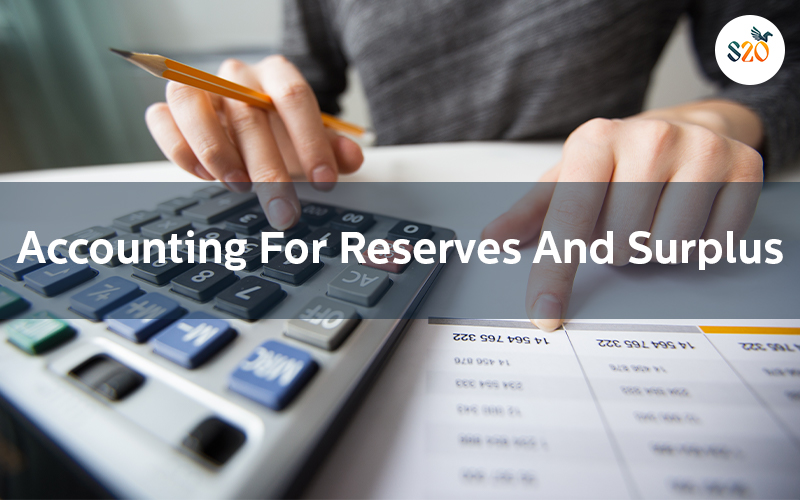 Just the way we categorize our expenditures at the end of every month, various business organisations include Reserves and Surplus in their balance sheet keeping their future needs as an organisation in the picture. In simple words, they are the savings of big corporates which can be used as assets during a crisis.

What Do Reserves And Surplus Mean?
Reserves
A financial accounting Reserve is a part of the shareholder’s equity except for basic share capital. A Reserve is profits that have been appropriated for a particular purpose. In accounting terminology, reserve implies the amount set aside for future activities which include buying assets, paying for bonuses or even legal settlements.

Surplus
Surplus describes the amount of an asset or resource that exceeds the portion that is actively utilised. In the budgetary context, a Surplus occurs when income earned exceeds expenses paid.
Reserves and Surplus, as the name suggests, are the accumulated profits that a company has earned and retained over time. Retained profits are the profits that are left after repaying the shareholders. General Reserves are created out of profits and kept aside for the financial strengthening of the company in bad years.

Difference Between Reserves And Surplus
Reserves are the primary amounts that are earmarked by the organisation for specific purposes. Whereas Surplus is where all the profits of the company reside.

Types Of Reserves And Surplus
Depending on their purpose there are various types of Reserves used in a balance sheet.

are a few examples of Capital Reserves.

A Capital Redemption Reserve comes in handy for the company on a rainy day. Several litigations are attached to this reserve such that the company can open this reserve only under certain circumstances.

Security Premium Reserve
It is the additional amount charged on the face value of any share when the shares are issued, redeemed and forfeited. Security premium account is a part of the Shareholders Fund, it refers to the difference between market value and the face value of a share.

Debentures are not backed by any kind of asset, lien or collateral. Free Reserves are those Reserves upon which the company can freely draw, Debenture Redemption Fund is one such Reserve.

Revaluation Reserve
Organisations have the freedom to construct line items for assets on the balance sheet when they believe it is a necessity for correct accounting to be presented. Revaluation Reserves are not inherently normal, but they can be used when a business assumes that the value of their assets will fluctuate after a certain time frame.

Other Reserves: Specifying Nature And Purpose

Accounting is a part of our daily chores, let it be a multi-crore business or the expenses of a middle-class family accounts play a vital role, here is a link to a certified accounting course in Ahmedabad that will make you a pro at finance and accounting.

Why Are Reserves And Surplus Called Liabilities?
Aren’t Reserves supposed to be good? They are money set aside for future endeavours and hazards, How is being financially safe considered a liability? Isn’t having surplus money a boon?

Well here are the answers to all your queries,

For a better understanding, we can compare Reserves to a bank, though the bank is always expected to have money, yet it is considered a liability keeping in mind that money is not for the bank but to meet up with the financial needs of their account holders.

To conclude, accounting at the end of the day is an asset to our lives, it is a massive ocean of its own, here is the address of an Accounting institute in Ahmedabad, they offer various  Accounting Training in Ahmedabad that will turn you from a liability to an asset.