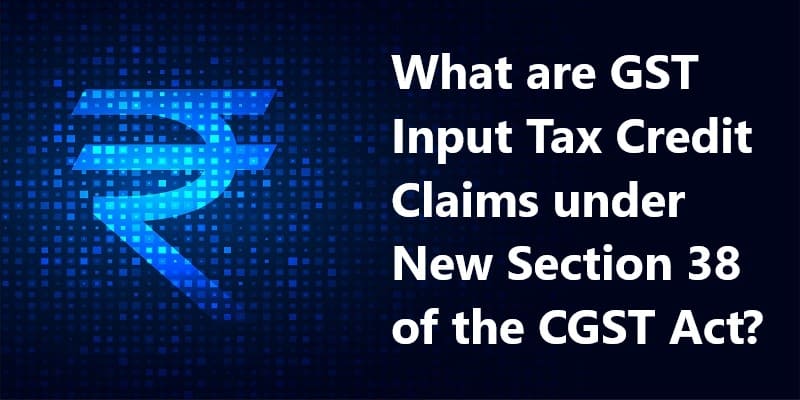 The Finance Bill 2022 added a new clause to the Central Goods and Services Tax (CGST) Act, 2017, replacing Section 38. The new Section 38 was suggested to tighten input tax credit further (ITC) claims due to the degree of ITC fraud that occurs via bogus organizations and fraudulent invoices. The requirements of this section will also assist in preventing any legal disputes.

The amended Section 38 has not yet been enacted by parliament or communicated to taxpayers. However, it may become part of the GST law in the coming months.

Let’s decode the new Section 38 and see how it affects a company’s ITC claims. The GST course in Ahmedabad are gaining utmost popularity in the recent times.

How does the existing section 38 Govern ITC claims?

The current Section 38 of the CGST Act has captioned ‘Furnishing details about inbound supplies.’ It controlled the provision of details of outward supplies (i.e., sales) by a provider, followed by the recipient (buyer) receiving such inward supplies (i.e., purchases) and claiming ITC on the same.

The extant part was built on a two-way communication paradigm but was never used. The seller provides details of outward supplies under Section 37(1), such as the GSTR-1. The buyer is then obliged to accept/modify/delete these supplies in their inward supplies report (i.e., the GSTR-2), which is subsequently transmitted back to the provider within the specified time frame.

Finally, the clause states that the receiver taxpayer must balance their inner supply with their supplier’s external supplies. If an error or omission is discovered, it should be reported to the provider. Furthermore, any tax and interest on any short payment must be paid to the government by the due date.

The Finance Bill 2022 proposes a revised Section 38 headed ‘Communication of information of inbound supplies and .’ It limits input tax credit claims in several ways and inhibits two-way contact between the supplier and the customer (although it was never followed).

The new section’s objective is expressed in two subsections:

The first subsection mandates that the information of outbound supplies given by a taxpayer’s suppliers be made accessible in an automatically generated statement, i.e., the GSTR-2B. (It should be emphasized that this mechanism is already in place; the change in legislation will now support the current CGST Rules.)

The GSTR-2B is prescribed in the second subsection. In other words, it informs taxpayers about the situations in which they may and cannot claim an input tax credit (eligible and ineligible ITC).

Some of the limits under this provision involving ITC ineligibility include circumstances where the supplier has just registered under the GST law, has failed non pay their taxes, or has unlawfully obtained additional ITC, to mention a few. In the next portion of our article, we shall decode each sentence in subsection (2) using an example.

Decoding the clauses of the revised section 38

The updated Section 38 subsection (2) is significantly more difficult for taxpayers to comprehend. So, let’s go over this part clause by clause.

(i) The first portion states that ITC cannot be claimed on supplies made by a provider during the required period* following registration under the GST law.

(ii) The second section states that ITC may not be claimed on supplies provided by a provider who has not paid their taxes and has defaulted for a specified time.

(iii) The third section states that ITC cannot be claimed on deliveries for which the provider has a tax obligation more significant than the tax paid during the specified period and within the defined limit.

(iv) The fourth section states that ITC may not be claimed on supplies given by a provider if the supplier claimed ITC over what was allowed under clause (a). This section also states that the excess is decided by the stipulated limit*.

(v) The fifth section states that ITC may not be claimed on supplies provided by a provider who has failed to pay their tax due by Section 49(12), subject to the criteria and limits prescribed*.

(vi) The sixth section states that ITC may not be claimed on supplies provided by a supplier if the provider is a member of such other class of individuals as prescribed*.

Impact of ITC claims once the revised section 38 gets notified.

Most taxpayers may be perplexed as to why they cannot collect input tax credits since their suppliers are newly registered or have defaulted. When GST was implemented, it guaranteed taxpayers a continuous supply of input tax credits. Let us explain why this part was created in brief.

Since the implementation of GST, input tax credit claims have been a source of tax evasion and fraud. Every year, the government loses hundreds, if not thousands, of crores to fraudulent taxpayers who claim an input tax credit based on forged invoices. These invoices are created by firms set up expressly for this purpose and subsequently shut down. As a result, the government is now proposing this updated Section 38 to eliminate all ITC-related fraud.

When this section is notified, three things will change for taxpayers.

How many taxpayers make their ITC claims process more efficient
This new part has not yet been approved by parliament. If enacted as is, taxpayers must establish a rigorous framework of vendor verification and a reasonable ITC claim procedure.

With automation, this may be accomplished in only three steps: