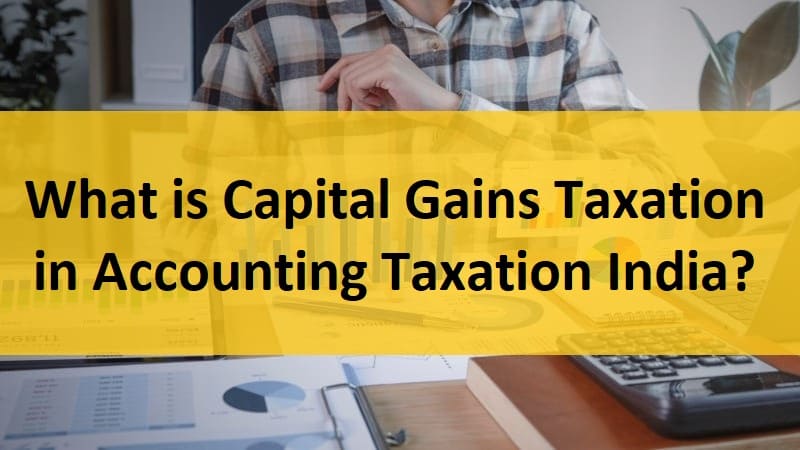 Almost everyone has some kind of asset, such as a house, gold, jewelry, stocks, or other investments. So, it’s important to know how taxes affect the gain or loss from selling such assets. How much tax you have to pay on these assets depends on how long you’ve had them. This is done under the heading “Capital Gains.” Learn more about Capital Gains in our account taxation course in Ahmedabad for detail understanding and how to manage this in your business.

What is Capital Gain?

A capital gain is a profit or gain made from selling something like a house, gold, jewelry, or stocks. There are two different kinds of capital gains:

For example, if you bought a house in FY 2017-18 and sold it 24 months later in FY 2017-18, the money you made would be called LTCG. Different types of capital assets have different holding periods.

Capital Gain in the Short Term

When you sell a capital asset and make a profit, this is called a “capital gain.” The profit that is made is an example of income. So, a tax has to be paid on the money that comes in. Capital gains tax is the name of the tax that is paid, and it can be either long term or short term. The tax on long-term gains starts at 10%, and the tax on short-term gains starts at 15%.

Under India’s Income Tax Act, a person doesn’t have to pay capital gains tax if they inherit property and don’t sell it. But if the person who got the property as an inheritance decides to sell it, taxes will have to be paid on the money made from the sale. Jewellery, machinery, leasehold rights, trademarks, patents, vehicles, house property, buildings, and land are all examples of capital assets.

The costs of making improvements and buying a property are indexed to account for inflation over the number of years the property has been owned. This lowers capital gains and also makes the cost base bigger.

How to figure out the indexed tax on improvements:

How to figure out the indexed tax on an acquisition:

Gain/Loss in the Short Term

Short-term capital gains are taxed at the same rate as the person’s income tax slab. For example, if a person has a short-term capital gain of Rs 6 lakh and is in the 30% tax bracket, he or she must pay Rs 1,87,200 (31.20% of Rs 6 lakh). The gain or loss from the sale of an asset is found by taking the sale proceeds and subtracting the cost of buying the asset, the cost of making improvements to the asset, and any costs that were only related to the sale.

Short-Term Capital Gain = Sale Consideration – Cost of Acquisition – Cost of Improvements (if any) – Expenses Paid Only for the Sale of the Asset.

If you sell listed shares or equity-oriented mutual funds within a year, you will have a short-term capital gain. This gain will be taxed at a rate of 15.60% (including a 4% health and education cess). But if you sell unlisted shares, which means you don’t sell them through the Indian stock exchange, you will have to pay taxes based on the income tax slab rate that applies to you.

Long-Term Gain in Capital = Sale Price Indexed cost of improvement Indexed cost of acquisition (if any) -Expenses that were only used to sell the asset. -Exemptions under sections 54, 54F, and 54EC, if any were used.

The following formula can be used to figure out what the Indexed cost is:

Note: Costs for improvements made before FY 2002-02 shouldn’t be counted.

Before, long-term capital gains on Listed Shares and Equity-oriented Mutual Funds were not taxed if they were sold after a year. But it only applied to shares that were listed on the Indian Stock exchange. This was true for both Indian and foreign companies. And the shares can only be sold on the platform of the Indian stock exchange.